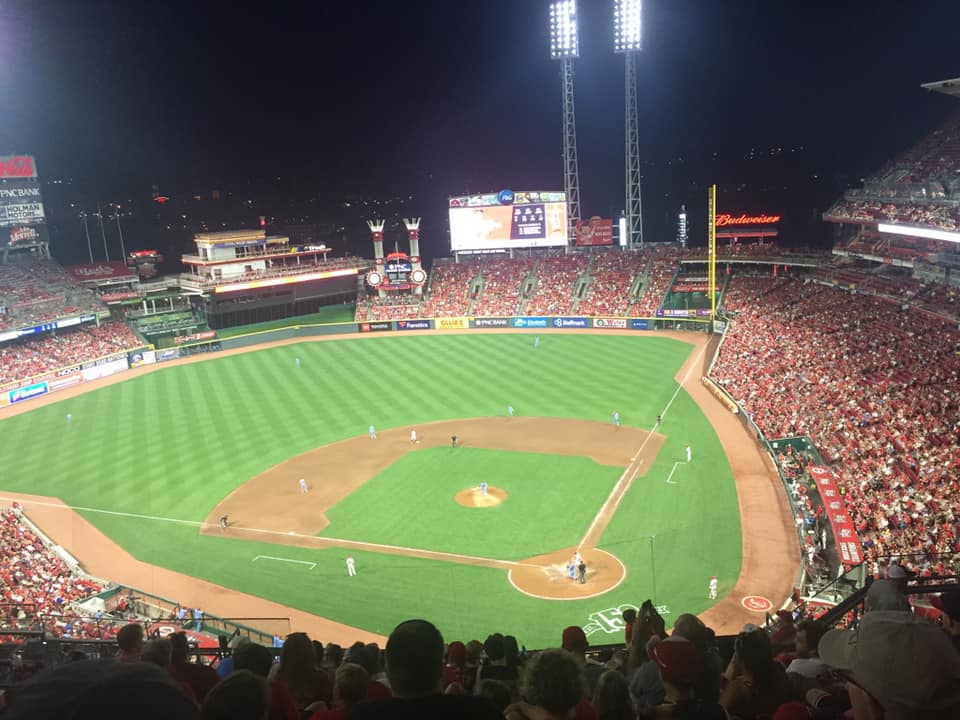 Hello everyone. I know it’s been awhile (8 months I believe) so if you are still here reading my articles then I thank you. I’m still here, playing Magic: the Gathering, and trying to figure out my way through this game in the post-Modern Horizons 2 landscape. There’s a lot that’s happened since I last wrote that I will cover in future articles, but today I want to talk about something…a bit different.

While you could apply what I’m going to talk about with any sport the one I am mostly familiar with is baseball. I’ve watched this sport since I was a small child, and have been following it intently for about 35 years (which in hindsight is only 5 years more than Magic: the Gathering has been around), and baseball has also undergone it’s fair share of changes (liked, and not liked by fans) over that time. However today I want to highlight how your Magic: the Gathering deck is similar to owning a sports franchise…in this case a baseball team.

As many of you know collecting Magic: the Gathering cards is in itself an investment. Buying cards that are in high demand when their prices are low can net a profit in the future, and in turn you take that profit to reinvest into the next wave of in demand cards. While that’s a simplistic way of viewing things that is where the investment focus is, however playing Magic: the Gathering has it’s own set of investments. When participating in an event, even at your local game store where the entry for the event could be as low as $5 (USD) you are looking to play your deck well enough to turn that entry into store credit (or other product) worth more than what you paid. One goal to aim for is to win enough in prizes to eclipse the initial investment of tournament entries as well as cost of the cards purchased. When putting a baseball team on the field its owner (or ownership group) hopes to see a similar increase in investment based on how the team plays, and interest in that team from the fans. While a baseball owner isn’t playing baseball like an owner of a deck of cards plays Magic the ownership part (as well as investment) is still there.

For example Star City Games recently had a weekend long event in Columbus known as SCGCON. Each day this past weekend had a tournament associated with it that had a substantial prize pool. The Friday and Saturday events had $20,000 worth of prizes while the Sunday event had $10,000 in prize support. The events on Friday and Saturday each awarded $3,000 to the first place winner, $2,000 to second place, $1,500 to third and fourth place, and so on. Let’s assume your deck, at the time of the event, would cost $1,300 to build completely. Obviously you have had your Magic deck for awhile so we’ll get back to that later. Add in the entry cost which for this event was $80, and you have spent $1380 just to enter that event. You would need to obtain no lower than fourth place to make a profit. Not everyone can do it. Just like baseball.

This doesn’t count the fact that the player has tested their deck, and the cards within may have been different when they last played (and those cards also have a cost as well). Nor does this count for the number of store tournaments played prior to showing up at a large event like this, or any prizes won at their local store. If you take the average cost of store tournaments being $5, and play once a week for a whole year, you’ve spent another $260 on just those store entries (assuming you have not acquired free entries from winning the previous week). So in total you have spent over $1,600 on the deck, play experience for a year, and entry to this big event. That’s quite the investment for one person. A lot can be riding on that one event, and often times it’s more than the event ahead of you.

Baseball works in a similar manner. The owners direct their General Manager to acquire players using the payroll they have set aside to compete in the upcoming season. They’ll assemble the players at their facilities during Spring Training, and through various rounds of playtesting (essentially Spring Training games) the organization will make the cuts necessary and compete with the players who they feel will best help them win during the regular season. Does it always work out? No. Of course not. However wins and losses should wax and wane…if the steps taken with your investment are done correctly.

While this isn’t a direct parallel with owning a baseball team Magic players do often make trades. Sure there are the traditional trades between players, but players will trade cards into stores to acquire new cards (or cash) in exchange. Does this sound similar? Store credit may even be an option, and one can think of that as “card(s) to be named later”, especially if what you want is not in stock at your local game store. Baseball owners do this often. There are even stories of trades that don’t happen (which provide great “What If…?” stories), however this is something very common in baseball. While the sport has a way to regulate trades between its teams, including a deadline where no more trades can be made after a certain date during the regular season of play, Magic players can trade at-will (except in the middle of a tournament). Baseball owners will trade for new players (ie: new cards) or cash (to use to purchase new players), or have the receiving team hold on to the player(s) acquired while the trading team makes a decision on what they want in return (player to be named later).

The construction of a baseball team is always tinkered with to some degree, and the same can be said about a deck of Magic: the Gathering cards. Some strategies, or cards (players), may not be working out and making room for possible improvements or different avenues to explore is needed. A Magic player will often times have extra cards in their collections. In a way these cards could be seen as a baseball owner views prospects. One must make a decision if those cards are going to see play in the future, or need to be let go to fill in gaps in the next deck you’re working on.

Building For the Future

While trades can happen in baseball for players ready to play for their new teams often times teams will trade for players that are in their plans for the future. This will often times (almost all the time) involve prospects (players who will play in the minor leagues until they are ready to advance to the big leagues). Being able to trade one or two players and receive three, or more, in return is a big investment in the future for many clubs wanting to advance their young talent through the system. In a way Magic players trading cards no longer needed in their decks for new cards that are not replacing the open spots is the same thing. By moving on from cards that are not performing well in the strategy you are playing will allow you to acquire new cards for a different deck you want to play. Perhaps a new strategy is showing up to counter your current deck. You’ll need a back up plan, and this is one way to have one. Having a second deck (or many decks for that matter) can allow you to pivot from one strategy to the next learning how multiple decks work, and being able to make the best decisions not only during play but also when attending larger events.

Just like with the first point about investments a Magic player will need to provide additional resources (more cards, store credit, or even money) to finish out their next deck as one can not build another deck on just trading alone. The same holds true for owners of a baseball team. While you can obtain a shell of a future team you will need to spend money to fill in the holes when you’re ready to present that team on the field in the big leagues.

While this may not sound like a great descriptor this has happened in both baseball, and constantly happens in Magic: the Gathering. With the latter each new set released provides new cards to acquire for either existing strategies, or to build new strategies with. There are times (especially recently) where new cards will invalidate your prior investments requiring you to obtain the new options in order to remain competitive. This may require giving up on cards you are trying to hold on to thinking there may still be value in them in order to acquire the current cards due to their power level. This is described among players as “power creep”. While cards in your collection may still be legal in the format you want to play your chances of winning decrease the older some of your cards become. In many ways there are diminishing returns on cards you own because eventually the demand for them simply won’t be there, and you’ll find yourself behind in competition.

The same can be said when constructing a baseball team. There used to be a time where teams could build whatever way they wish, and still compete. For example the St Louis Cardinals in the mid-1980’s built their team on pitching, defense, and speed on the base paths. That model was not sustainable as the 1990’s started ushering in an era of base-to-base advancement (ex: only moving up one base on a hit) waiting for a multi-run home run to happen. Even that changed in recent years where stats such as pitcher’s wins, saves, hitter’s batting average, and many other traditional stats you would find on the back of a baseball card are no longer viewed as the proper way to evaluate and build a team. Those organizations who were slow to move to this new, analytical, way of player development have been stuck in a trend of losing seasons year after year because the other teams (just like other Magic players playing with the newest cards and strategies) have passed them by. Catching up would require discipline, sacrifice, and…you guessed it…investment.

This is not to say that there is a wrong way to play Magic, or build a baseball team, but if you are not paying attention to trends (no matter how harmful to the consumer they may be) you will be left behind all alone wondering what happened.

While Magic: the Gathering may relate better to individual sports such as golf, tennis, or even bowling, in many ways you are the owner, general manager, and field manager of your deck. How you construct your deck, just like with a baseball lineup, could help determine victory of defeat, and highlight whether your investment will pay off over time.

Thank you all for reading. If you have any comments please leave them below. You can also reach me on Twitter, and Facebook. Also check out The Astrolab Podcast where Joe Dyer and I discuss Magic: the Gathering, and our favorite shows.

I have been excited about the Dominaria United release, and have enjoyed playing Magic: the Gathering these last few months. It’s time to start talking about this game more. Stay tuned for my next article, and thank you again for reading. 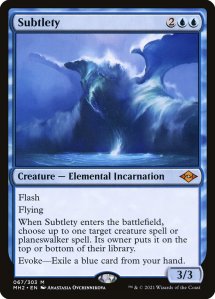 September’s spotlight card is Subtlety. Is this the missing link for Azorius Control decks in Modern? With the format being more focused on creatures and planeswalkers only time will tell if this elemental will remain in decks as Control players fight for their place at the top tables.